Liana isn’t just a fellow Harper author (Time and Shadows series), she’s also an incredibly skilled writer, and a very cool person to boot. That’s right, a triple threat! Well, while you wait for word about my next work (news coming soon!) she’s here to talk about her latest book, Bodies in Motion.

Newton’s First Law of Motion states “A body in motion will stay in motion until acted on by an outside force”. We usually think of this in terms of physics, physical objects, and friction but it applies to choices and lives too. Often a person will set their course and stay on it unless acted on by something external force, even if the destination is catastrophic. For Selena Caryll her course is a downward spiral, she’s lost everything and has no future to look forward to. For Titan Sciarra his life was headed for an early death until he was shot down in the war, the subsequent injuries and his absence from the battle lines allowed him to change direction.
In a world where two stagnant cultures are on a collision course with mutual destruction it will take something extraordinary to change the world. And what’s more extraordinary than love?

Why did you write this book?
Many, many years ago when I was trying to take a mental break from the Time and Shadows series I decided to try writing Harry Potter fanfic. I was fascinated by the isolation Hermione had at the end of the series, how she’d given up every aspect of her muggle life to become part of something else. And I wondered if she’d ever want to go back to MP3 players, smartphones, and democracy after fighting to live in the hyper-controlled world of the witches. Needless to say… I don’t appreciate Harry Potter well enough to write good fanfic in that universe and the idea quickly spun out of control. I kept thinking of magic in terms of science, implants for wands, crews instead of Hogwart’s houses.

I took the threads of the story and started to write NEWTON’S CRADLE, and realized I’d jumped too far ahead in the story for it to make sense. So, I went back and tried to figure out where I needed to start. Not with the war, because wars are boring, but with the fallout of the war. How do you rebuild cultures and trust and friendship after something as awful as a civil war?

How do you forgive someone who fought against you because they thought it was the only way to survive?

BODIES IN MOTION is the catalyst for change, it’s the pivot point where everyone in this universe gets a second chance at making the right choice.

Why did you serialize the novel? I’ve wanted to serialize a novel for several years now. In part because I like the old-time serialized novels from magazines (think Sherlock Holmes) and in part because I wanted to see how modern readers would adapt to the format. This summer (2017) I realized that I was going to be traveling so much that I wouldn’t have time to blog regularly. A serialized novel seemed like the solution. It gave my readers something to check-in to see, and it served as an introduction to this new universe.

Would you serialize another novel? Maybe? There were some die-hard, “I will wait until the book is out!” readers who avoided my blog all summer because they didn’t want spoilers. And then there were readers emailing me from other countries saying they missed a train because they stopped to read the newest chapter. I probably won’t serialize the next book in this series (LAWS OF ATTRACTION coming 2018) but maybe the first book in a new series sometime later on.

For readers who enjoyed the Time and Shadows series, what does BODIES IN MOTION offer? The Time and Shadow series (The Day Before, Convergence Point, Decoherence) with Sam and Mac was SF-lite. Clones and the multiverse, but less high-tech space exploration. Still, it shares a theme of choices with BODIES IN MOTION. Sam realized she was an einselected node and that even her smallest choices affected the fate of the multiverse. In BODIES everything is post-war, people are dealing with the trauma of having lost people they loved, of having killed people they once considered friends, and there’s no one in Selena’s age group who wasn’t effected. They didn’t get to opt out of the war. When a society is that fragile, every choice matters. Every word, every action, every inaction has a long-term consequence. This is only the start of the series so we don’t get to see everything yet, but you get to see the start.

How would you describe the life of a writer? Imagine sitting in an overgrown cottage in the woods, bears trundling past as the snow falls on withered vines. Inside a woman sits over a magic tablet conjuring infinite worlds. She captures these worlds, presses them into a portable container, and distributes them around the world. When someone finds one, they enter another world.

That’s writing. It’s magic done with computers and inks and patience. It’s the ability to conjure best friends, vicious enemies, and infinite wonders out of nothingness. Everyone should try story-telling at least once.

What advice do you have for writers who aren’t published yet? Keep at it! Keep writing. If you want to publish keep writing, keep learning, keep trying. If a book isn’t working, write a new one. If you want to write but can’t figure out how to make the story in your head appear on the page take classes, meet with writing groups, check out online places like CritiqueCircle.com and give yourself space to learn. The only thing standing between a new author and publication is time. If you keep at it, you’ll get published someday. 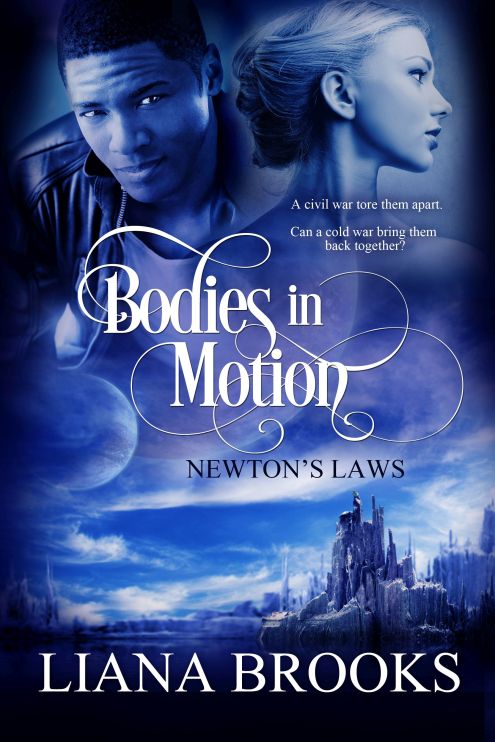 Selena Caryll lost everything in the war: her ship, her crew, her family. The only thing keeping her going is the hope that somehow the feuding, ground-bound settlers and the fuelless space fleet can set aside their differences. But getting the politically-fractured fleet moving again is more than she can manage alone. For now, she has to settle for working undercover with the planetary police force.

When someone tries to reignite conflict between the planet-siders and the fleet, there’s only one person who has the rank and ability to help Selena protect the fleet: Titan Sciarra, Fleet Guardian—the one man she’s tried hardest to avoid since the war destroyed her life.

In a world where the stagnant weight of tradition can be as deadly as any knife, the only way to survive is to keep moving.

And you can sign up for her newsletter (and get a free book!) HERE

Liana Brooks write sci-fi and crime fiction for people who like happy endings. She believes in time travel to the future, even if it takes a good book and all night to get there. When she isn’t writing, Liana hikes the mountains of Washington with her family and giant dog. Find her at LianaBrooks.com or on Twitter as @LianaBrooks 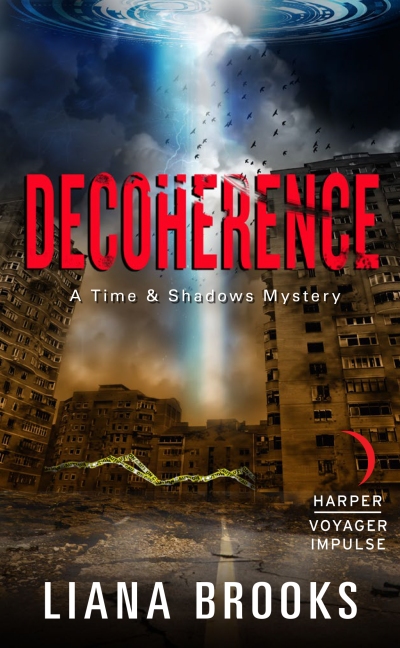 Samantha Rose and Linsey MacKenzie have established an idyllic life of married bliss in Australia, away from the Commonwealth Bureau of Investigation, away from mysterious corpses, and—most of all—away from Dr. Emir’s multiverse machine.

But Sam is a detective at heart, and even on the other side of the world, she can’t help wonder if a series of unsolved killings she reads about are related—not just to each other, but to the only unsolved case of her short career.

She knows Jane Doe’s true name, but Sam never discovered who killed the woman found in an empty Alabama field in spring of 2069. She doesn’t even know which version of herself she buried under a plain headstone.

When Mac suddenly disappears, Sam realizes she is going to once more be caught up in a silent war she still doesn’t fully understand. Every step she takes to save Mac puts the world she knows at risk, and moves her one step closer to becoming the girl in the grave.

Liana Brooks is a fellow Harper Voyager Impulse author, and a good writer to boot. Decoherence, is the third book in her Time & Shadows Mystery series. Its awesome, you should check it out. To tantalize you, here are the first two pages.

“Decoherence (n): a period of time when all iterations collapse and there is only one possible reality.”

~ Excerpt from Definitions of Time by Emmanuela Pine, I1

… three. Rose stood and peered through the frosted, warped glass of the conference room as the speaker turned away. It didn’t matter which iteration she was in, Emir was predictable. She had seven seconds to do a head count. She didn’t need that long.

A quick head count was all it took to confirm that the einselected nodes she’d been sent to assassinate were where they belonged.

Every iteration had nodes, people or events that kept that variation of human history from collapsing. Dr. Emir had created a machine that allowed people not only to move along their own timeline, but at critical convergence points, it allowed them to cross between realities. But the Mechanism for Iteration Alignment’s greatest ability was the one that allowed Dr. Emir and Central Command to steer history by erasing futures they didn’t want.

Rose knelt beside the door, did one final sweep for alarms, and nodded for her team to move in. It was her job to cross at convergence points, kill the nodes, and collapse the futures that no one wanted.

One look at the version of herself watching this iteration’s Emir with rapt fascination was enough to make Rose want to snip this future in the bud.

Chubby was the first thing that came to mind. Rose’s doppelganger was enjoying being at the top of the social pyramid and probably gorging on whatever passed as a delicacy here. The squared bangs with a streak of riotous red only accented the corpulence and lack of self-control the inferior other had.

Even with a heavy wood door between them, Rose could hear that this iteration’s Emir was hypothesizing things the MIA was never meant to do. Everyone with half a brain knew that decoherence didn’t combine iterations, it crushed them. Only the true timeline, the Prime, would survive decoherence. Planning to welcome and integrate doppelgangers into the society was pure idiocy.

The techs sealing the door shut gave her the high sign.

Rose nodded to her hacker.

“Cameras locked. Security is deaf and blind, ma’am” Logan’s voice was a soft whisper in her earpiece. He was a genius with computer systems, a fact that had saved him when they collapsed I-38 three years ago. “We have a fifteen-minute window.”

Rose nodded. “Permission granted.” She waved for the soldiers to move out. There could be no risk of failure. No chance for the errant nodes to escape, and no risk that her team would get killed here.

Liana Brooks write sci-fi and crime fiction for people who like happy endings. She believes in time travel to the future, even if it takes a good book and all night to get there. When she isn’t writing, Liana hikes the mountains of Alaska with her family and giant dog. Find her at LianaBrooks.com or on Twitter as @LianaBrooks