I’ve been invited to the New York Comic Con as a panelist! I’ll be part of the “Not Your Mother’s Fairy Tales” panel on October 11, 3pm. I’ll be sure to have plenty of swag for anyone who wants it, and will be happy to sign any copies of The Stolen. To be safe, you should probably get a paperback now, you know, so you’ll be sure to have it in time.
Amazon
Barnes & Noble
You can also order it from your local bookstore, (Indiebound Link) which is good on several counts. First, it’s always good to support your local bookstore. Second, it will help me get the book on the shelf.
If you do have a copy to sign, I’ll have some extra swag for you. Just saying. That being said, I will sign an e-reader if you want, but a book would probably be better.
See you in October New York!

As of today, I’m a published author!

It took a long while to get here, but then any dream worth achieving takes time and effort. I’ve been posting about my road to publication, and it could be argued this is the end, but I don’t think so. As cliche as it might be, this is really just the beginning for me (I hope!).

Harper Voyager made a sizeable web preview available here, so feel free to “try before you buy.”

Of course the paperback is still scheduled for release on August 5th, but I know you can’t wait that long. It’s okay, you can get both. I’ll understand.

Stayed tuned here for upcoming events; interviews, guest blog pieces, and even in person signings. Speaking of which, be sure to stop by The Qwillery and check out my first interview (direct link here)! While you’re there, be sure to vote in the 2014 Debut Author Cover Challenge Wars!

I’ll also have a giveaway for a signed copy of The Stolen before anyone can even buy it!

Now, if you’ll excuse, I have a happy dance calling my name.

It’s my sincere pleasure to have the opportunity to interview Katherine Harbour, author of the novel Thorn Jack. A modern retelling of the Scottish ballad, “Tam-Lin.” It’s always nice to meet a fellow faerie fan, especially one who does such a fine job with it. I don’t normally go for the YA subgenre, but if more books were like this, I’d become a quick convert. It’s a dark and haunting story filled with characters that have depth and genuine voices that make them both believable and relatable. Katherine also has a gift with imagery and I found her prose truly exceptional. Simply put, it’s everything a good book should be; a great story with interesting characters that you genuinely care about.
Katherine was kind enough to take time from her busy schedule promoting the book to join me at the bar for a pint the craic.

Hi, Katherine. First, congratulations on the publication! Welcome to A Quiet Pint, and thanks for taking time from what is no doubt a busy schedule to share a glass and answer some questions.
Thank you!

First question, and possibly the most important: what are you drinking?
Starbucks espresso. I like to be wired when I write.

What about the legend of Tam Lin did you find most appealing? What about the story made you want to do a modern retelling?
I like that the girl rescues the boy, that the faery queen, the antagonist who is going to sacrifice Tam Lin, might actually love him. I wanted to write a modern version because I had the idea of making it more of a ghost story and adding another dimension, such as the heroine’s sister.

As writers, we’re supposed to be like parents and not have a favorite child (character), but we all do. Who is your favorite character and why?
My favorite character is Finn. She was fun to write as she began to awaken from her grief and became intrigued by Jack and his very dangerous family—she’s part Alice in Wonderland, part Nancy Drew. As she developed into a young woman whose curiosity led her into situations where she had to use her wits to survive, I became so proud.

How much research did you do for this book?
I tried to read or re-read every book on Celtic folklore or faeries I could find. I also bastardized much of the Gaelic and Celtic languages, since most of the Fatas in Fairy Hollow are Irish.

You clearly have a love of faeries, what about them most appeals to you?
My first encounter with a faery was Maleficent in Disney’s animated Sleeping Beauty. In the ‘80s, Charles de Lint and Terri Windling wrote faeries and elves into the modern world and it became a popular subgenre. Then I began reading Celtic mythology and found the faery folk to be a little terrifying, especially their associations with the dead, their capricious personalities, and the variety of shapes they took, from beautiful, to puzzling, to grotesque.

Do you believe in faeries?
Hmm. You’re not supposed to talk about them because they might be listening.

Did you know from the start where the story was going to go, or did you get surprised along the way? If so, when and by whom?
I basically knew where the story was headed, but I was surprised by some twists and turns. I was surprised by the introduction of the Black Scissors, (I woke up one morning with the poem describing him in my head), and by his being Reiko’s former true love. Reiko Fata, the ruthless Fata queen, also surprised me by revealing that she’d grown a heart.

Will we see these characters again in a future novel?
There are two novels—Briar Queen and Nettle King—set to follow Thorn Jack. Briar Queen, #2, is still being revised. I’m just finishing the first draft of Nettle King, #3. Finn’s, Jack’s, Christie’s, and Sylvie’s encounters with the Fatas haven’t ended yet.

In the film version of the book, who do you see as playing the main characters?
I don’t know. I’ve got such a vivid picture in my head of the main characters. I’ve placed some ideas by others on my Thorn Jack Pinterest page, such as Emma Watson for Phouka and Chloe Grace Moretz for Finn.

Is there anything else you’d like to share?
All of the fantasy and sci fi authors chosen by Harper Voyager through the open submissions call have intriguing books being released in the next few months. I strongly suggest checking them out!

Thanks again, I wish you great success with Thorn Jack and your writing career, and hopefully you’ll get a chance to stop by again sometime.
Thank you!

You can find Thorn Jack online at the usual providers: Barnes & Noble, direct from Harper Collins, Amazon, iTunes, Google, Indiebound, and Audible. You can find Katherine at her website, here. 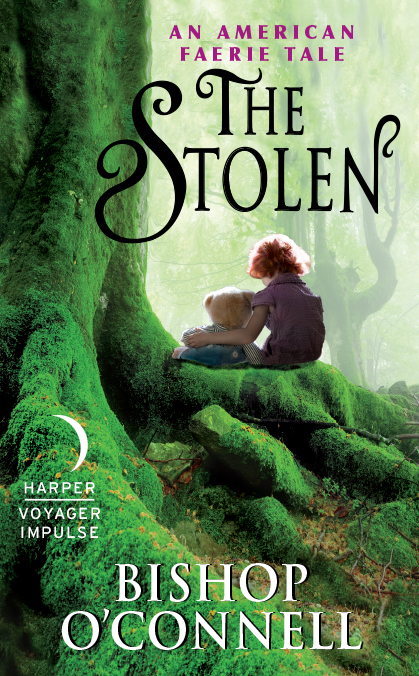 I was admittedly nervous how the cover art might turn out. As a first time author, I was worried I might get something less than stellar, or that I would absolutely hate it. I’m delighted to be wrong! I love the cover art, and I think it captures the feel of the story perfectly. For those who haven’t gone to the link, here, this is the jacket copy:

Tonight, for the first time in over a century, a mortal child will be kidnapped by faeries.

When her daughter Fiona is snatched from her bed, Caitlin’s entire world crumbles. Certain that faeries were only a fantasy, Caitlin must now accept that these supernatural creatures do exist—and that they have traded in their ancient swords and horses for modern guns and sports cars. Hopelessly outmatched, she accepts help from a trio of unlikely heroes: Eddy, a psychiatrist and novice wizard, Brendan, an outcast Fian warrior, and Dante, a Magister of the fae’s Rogue Court. Moving from the busy streets of Boston’s suburbs to the shadowy land of Tír na nÓg, Caitlin and her allies will risk everything to save Fiona. But can this disparate quartet conquer their own inner demons and outwit the dark faeries before it’s too late?

The book will be available on ebook on July 22nd and is only $2.99, a bargain at twice the price! You can order it now and beat the rush here:

It will also be available in paperback on August 5th! Only $7! Get both versions and have a matched set!
Amazon
Barnes & Noble