I’m a firm believer in passing along books, but I can’t do that in this medium. However, I can tell you about those I really enjoyed in the hopes that you might as well. Also, I think it’s good to give credit to work you enjoy. So, this is the first of an ongoing series. I hope it introduces you to something new, or returns you to something you love already.

I found The Dresden Files by Jim Butcher when I stumbled on the short lived TV series, which you can read about here. Since I hadn’t read the books first, I enjoyed the series, though it lasted only one season. (It’s currently available on Netflix). As I understand it, many of the more die-hard fans weren’t happy with the series because it wasn’t “true” to the novels, but no television series will be. Even Game of Thrones, which spreads each book over an entire season, diverges from the books in a number of ways.

The series is wonderful, and possibly one of my favorites. In the spirit of full disclosure, I’ve “read” only one of the books, Side Jobs. All the others I’ve listened to on audio book, and they are awesome! James Marsters is an incredible voice actor, and actor in general. I’d say his performance had a lot to do with why I love this series so much; he doesn’t just read, he embodies the character. However, he doesn’t read the thirteenth book, Ghost Story, and while the actor does a fine job, it just wasn’t the same to me.
The protagonist is Harry Dresden, “the only openly practicing professional wizard in Chicago,” he’s even in the phone book. 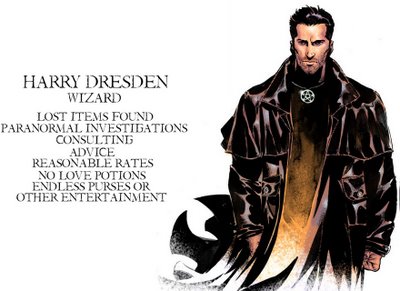 He’s tough, and needs it because he regularly gets his ass handed to him, but he never gives up. In most cases, it’s actually his intelligence and guile that wins the day. In more than one book, for example, he allies himself with parties ignored by the supernatural community, and thus underestimated and it gives him the advantage. He’s snarky, witty, and has a sense of humor that I just love. It’s dry and more than a bit dark. Here are some choice quotes:

“You’re in America now,” I said. “Our idea of diplomacy is showing up with a gun in one hand and a sandwich in the other and asking which you’d prefer.”

“There was a sound of impact, a raspy, dry scream, and the vampire went down hard. It lay on the ground like a butterfly pinned to a card, arms and legs thrashing uselessly. Its chest and collarbone had been crushed. By an entire frozen turkey. A twenty-pounder. The plucked bird must have fallen from an airplane overhead, doubtlessly manipulated by the curse. By the time it got to the ground, the turkey had already reached its terminal velocity, and was still hard as a brick. The drumsticks poked up above the vampire’s crushed chest, their ends wrapped in red tinfoil. The vampire gasped and writhed a little more. The timer popped out of the turkey. Everyone stopped to blink at that for a second. I mean, come on. Impaled by a guided frozen turkey missile. Even by the standards of the quasi-immortal creatures of the night, that ain’t something you see twice.”

Butters stared up at me, pale, his eyes terrified. “We’re not?”
“No. And do you know why?” He shook his head. “Because Thomas is too pretty to die. And because I’m too stubborn to die.” I hauled on the shirt even harder. “And most of all because tomorrow is Oktoberfest, Butters, and polka will never die.”

Harry also has the aid of a spirit of intellect, who happens to live in a skull, and is named Bob. 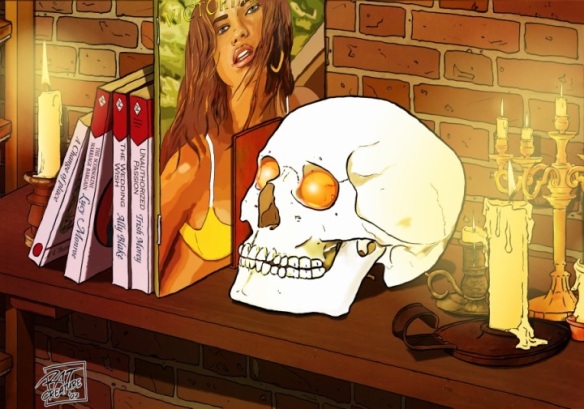 Bob is the best comic relief I’ve ever read. He’s a lecherous incorporeal spirit with a fondness for bodice ripper romance novels, but is also sarcastic, witty, and a perfect foil to Harry. Harry, is an old fashioned gentleman, opening doors, coming to a lady’s defense. Bob, however, on more than one occasion possesses someone and turns a sorority party into something Caligula would admire. He also has great lines; one that I keep coming back to is: “What you know about women, I could juggle.” The other characters also step off the page. Actually, they leap off and do a rather impressive song and dance routine. I’m also impressed by the detail with which Mr. Butcher has created his world and its mythos.

If you like fantasy and/or urban fantasy, I think you’ll enjoy The Dresden Files. If you like audiobooks, I can’t recommend it enough. I’ve listened to them all at least twice, some three times, and I’m anxiously awaiting the next release. The series is entertaining, exciting, hilarious, and an excellent escape. It might just have you wanting to make a trip to Chicago to look for his office. If you find it, let me know!