In this edition of A Story is Born, I.L. Cruz is here to talk about her Enchanted Isle series. I found I.L. through her blog, Fairy Tale Feminista. If you like faerie tales, you’ll really enjoy her site. I highly recommend it, even if she does spell it fairy instead of faerie.

Starting from the Beginning: The Birth of The Enchanted Isles series

I remember the story that started it all.

My daughter was perfecting the art of being two and refused to stay down for her nap. My solution was to read to her from a book of fairy tales she’d gotten for her birthday. One of the stories was Rumpelstiltskin. I read the story and she fell asleep, but my mind kept turning the story over and over in my mind.

In an era where everything sends everyone into fits of ire, I’d say this took me to four or five—annoyed and pensive. Childhood is full of stories that cast men and boys as heroes for being bold and clever, but girls and women are heroes only when they’re meek and beautiful. The more I thought about it, the more it bothered me. It began the germ of an idea.

I started looking for instances where women were at the heart of an adventure and more often than not romance was center stage. Now, don’t get me wrong. I like a good romance for men or women in any combination—it makes a story more well-rounded. But the more I read, the more I realized that a romantic entanglement spurred women and girls in adventure stories as though being female meant adventure for the sake of it was unthinkable. Being a proactive kind of person, I decided the only way to fix this oversight, was to add a story of my own.

My aims were initially simple. Write a story about a woman who engaged in an adventurous life and make her Latina, another deficit I’d noticed. I knew she was would have a love interest, but it would have little to do with her motivations. Because my reading of fairy tales gave rise to this idea, I began my search in the pages in my daughter’s books. This was at a time when fairy tale reimaginings were becoming popular. I settled on Mother Goose, but writing is rarely that simple.

The book, which would become a series, evolved through time. At first it was a mystery and then mystery/fantasy. At one point it became a YA novel because I went to a conference and the “expert” said it should be geared to young adults. It was at the same conference that someone else gave my work a title. I spent an inordinate amount of time trying to tame my idea into a YA mold.

Then I remembered what originally brought me to writing. I wanted to see myself reflected in genre fiction. And I couldn’t do so within a context that was pushed on me. So, I did the hardest thing a writer has to do. I started from the beginning. I still liked my characters, but I knew the situations I was subjecting them to were artificial (as much as that is true for a world outside our own where magic is real). I opened myself up to other possibilities.

My characters had been with me long enough to talk back—a scary prospect to any sane person, but a common occurrence for a writer. From my “conversations” with my characters the Enchanted Isles books were born. It’s been and continues to be a rewarding and at times, heartbreaking experience, but I’m so happy it’s my career.

You can find I.L. at the aforementioned Fairy Tale Feminista, her website here, and on Twitter here.

You can find her books at the links below.

A Smuggler’s Path
Digital or Paperback 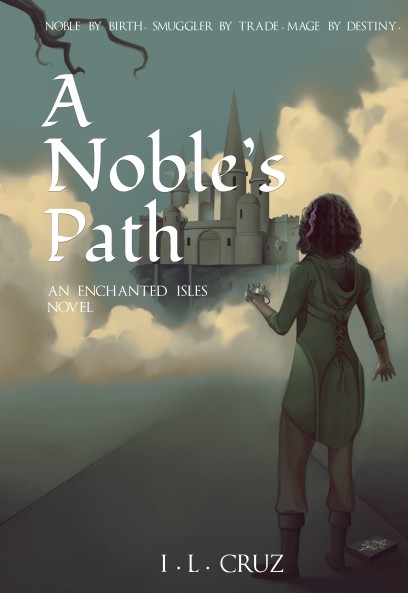 A Noble’s Path
Digital or Paperback