I’ve been a fan of John Scalzi for a while now. Not just his writing, which is excellent on many levels, but in how he presents himself. His blog, Whatever, is exceedingly entertaining, informative, and I think well presented. He doesn’t squash dissenting opinions; quite the opposite in fact, but he does require that you make intelligent arguments that don’t involve personal attacks. My admiration of him extends so far that I borrowed his comment policy, with his permission. In case you haven’t read it, you can find it here. Beyond all that, I respect how his so eagerness to help other writers. Scalzi is a best-selling, award-winning (Hugo) author who has been writing for more than a decade and could rest on his laurels. He doesn’t do that, though. He’s a big supporter of other authors and even devotes a couple of spots a week on his blog to letting authors talk about their upcoming novels. I was lucky enough to get such a spot when The Stolen was released in paperback. You can read my guest post here. I was beyond delighted to get the slot, and he was a gracious host, calmly responding to my frantic emails when I wasn’t sure my materials had been received. I’ve enjoyed many of his books and was hoping to one day meet him, if for nothing else than to thank him for all he does for new authors.

When I learned he was going to be doing a reading for his novel Lock In, in my proverbial backyard, I was hopeful I’d be able to see him. However, I travel for my day job, and when I landed my reading one week after him, at the same venue, I knew my travel schedule wouldn’t allow me to make it. As luck would have it, I was going to be in the same area as him for a future appearance and I was determined to make it to that event. When I did my reading, I was surprised to hear he’d given me a plug during his event. Two words: class act. He even signed a book and left it for me to retrieve. I think it’s a sign of literary success to have John Scalzi as your opening act.

When the day arrived for his talk near my job, I showed up with friends, all of whom were going to enjoy me being a little star struck as much as the event itself. I passed Scalzi on the way in, but he was on the phone and I certainly wouldn’t intrude, so I bided my time. I will say, I thought he’d be taller, but then I often forget how big I am, so most people are shorter than me. We found our seats and the event began. He is a master show man. The audience was mostly, if not entirely, devoted fans, but he still knew how to work the room. I was trying to take mental notes to apply to my future events. He constantly made eye contact with his audience and made his performance look easy. I knew he was funny, his humor is one of the best parts of his writing, but he was even funnier in person. He read a couple of humorous essays and from a chapter of Lock In that was edited out, so we were the only ones to get to hear it. He also spoke about the GamerGate movement, which if you’re not familiar with it, here are some places to catch up: Gawker, Time, and Newsweek. Scalzi has been unflinching in his confrontation of those in GamerGate, and one thing he said really stuck with me. People have been accusing him of “white knighting” for the women who have been threatened with death and rape, some of whom have literally fled their homes in fear. His reply was, and I’m paraphrasing, that white knighting is when you step in front and say I’ll protect you. It isn’t white knighting to stand with those being threatened and say I’m with you and this isn’t right and I won’t just stand aside while watching it happen.

He also did a Q&A, and then it was time for the signing. I’d brought a copy of The Stolen that I had signed for him and I was hoping to get a couple of minutes with him so I purposely went to the end of the line, even letting a couple people cut in front of me. When I reached the table, I was a little tongue-tied, but I gave him the book and he responded politely and, I thought, sincerely. He said it was nice to meet me and asked how my event went. Of course, I’d planned what I wanted to say and, of course, it was gone. I did manage to thank him on behalf of all the new authors he has helped. He smiled and said he was just paying it forward. One of my friends took a picture of him and me while we shared some quick conversation, but there was still one person in line behind me, so he shook my hand and I went on my way. 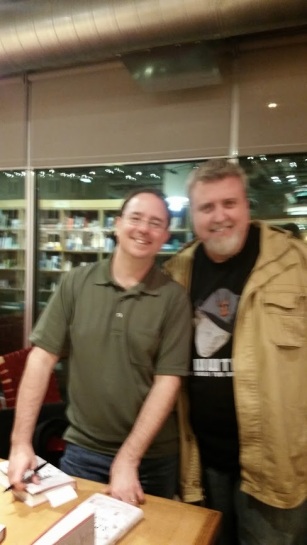 They say you’re not supposed to meet your heroes, that you can only be disappointed. I don’t know as I’d call him my hero as much as someone I respect and admire, both personally and professionally. Professionally, he’s achieved great success, but is eager to offer a portion of his spotlight to help others. I’ve heard him say, or rather read that he’s said, more than once, and worded in different ways, that he doesn’t believe anyone has to lose for someone else to win in the writing world. He’s made it up the ladder and rather than pulling it up after him, he drops more ladders down to help others up. He’s got only a couple years on me in terms of age, but I hope if I ever reach a level of success anywhere near his, I stay as down to earth and genuinely appreciative. Personally, he stands up for, and most importantly with, those who are bullied and harassed for daring to have an opinion that differs from others. He believes everyone should be treated fairly and with respect, no matter their opinions, up until they start treating others in an unfair, disrespectful manner. His philosophy seems to be (I wouldn’t presume to speak for him) similar to my own: your right to swing your arms ends just where the other person’s nose begins.

John Scalzi is a good writer, a genuinely good person, and truly a class act. If you ever get the chance to see him in person, run, don’t walk, to his event—you won’t regret it. In the meantime he has a number of books available, some of which I can vouch for as truly excellent reads: Lock In, The Android’s Dream, and Old Man’s War (along with the subsequent books in the series).

6 thoughts on “Meeting Your Heroes”